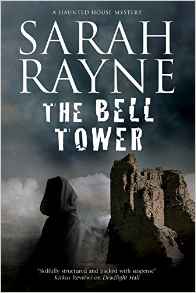 Nell West is doubling the size of her Oxford antique shop, and there are some odd lights and sounds at night. Then some plaster removal reveals writing on a wall, and a diary is found under the floor boards.

Meanwhile, in tiny Rede Abbas, they are reviving the Revels that date back to at least Tudor times. They hope to include a song called “Thaisa’s Song”, but cannot find a score for it. Maeve Eynon, owner of Cliff House which lies near the old abbey, which has mostly fallen into the sea, advises them to not even think about using the song if they find it, as bad things happen whenever it is heard. She’s just the local hermit, though, so no one pays any attention to her opinion.

Nell and her partner, Michael, make plans to meet at the Revels, which Nell’s daughter, Beth, is attending with her school class. Things go awry, though, when Nell goes for a walk on her own and meets Maeve by the old bell tower. In the meantime, people are working at translating the book beneath the floor, and some old papers in Rede Abbas have been discovered and brought to the attention of the librarian; these things explain the evil goings on at the abbey, the bell tower- which is submerged most of the way at high tide- and Cliff House.

As all the bits and pieces are finally put together, it turns out to be a sad story of murder, people having sex with folks they weren’t supposed to have sex with, a genetic disorder, and people getting a little bit crazy living alone with the past. There is a small supernatural element, but it’s very minor next to doings of the living. The tale runs from the 16th century to the 21st, and includes agents of Henry VIII on their quest to shut down Catholic religious houses and take any wealth they had, landowners who think they can do what they want with the people who lived on their land (which, in fact, they could back then), attempted murder, and that odd song.

I was disappointed. The story was fractured by jumping around through three points in time without a clear indication of which time period it was in. Much of the story was told through diaries, and it was sometimes hard to tell who and when the writer was. Having Nell and Michael be in both the Oxford building and at Rede Abbas is quite a coincidence. Some things are never explained- like where Thaisa’s song originally came from and why the bell was frightening to people. And I never felt a sense of creepiness or horror; bad things happened, but it was all kind of… cozy? It didn’t do what I feel horror should do.

I received a copy of this book free from Net Galley in return for an unbiased review.

Neither of these things altered my review.