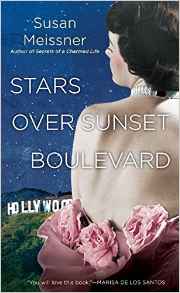 Violet, Audrey, and Bert are three young people with dreams in 1938 Hollywood, all working at Selznick International studio. Violet wants a husband. Audrey wants to be a film star. Bert wants to go back to college and become an ornithologist. Bert also dreams of Audrey; he has such a massive crush on her he can’t see anything but her. And Audrey and Violet have secrets as well as dreams; secrets that could easily destroy those dreams.

Their lives play out as ‘Gone With the Wind’ gets filmed at the studio, starting with the massive burning of Atlanta scenes. After the movie finishes, Audrey and Bert leave Selznick Studio, but the three remain close friends. The story takes us through WW II and after. Audrey and Violet have times when their friendship threatens to implode, but somehow things work out. The story is framed with short chapters set in 2012, when Violet’s family is cleaning out the bungalow where she and Audrey lived, and a vintage hat accidently gets sent to the consignment store. The hat is one anyone would recognize: it’s the green velvet hat Scarlet O’Hara made out of her mother’s drapes. How did this come to be in Violet’s possession?

I was disappointed. I couldn’t manage to like Violet; she came across as sweet and innocent at first but turned out to be very manipulative. Audrey was okay, but kind of flat. Bert is just a prop for the women to use. They just didn’t seem real and the dialogue is stilted. It’s almost like the book was a first draft, and the author needed to go back and flesh out the people. Not unreadable but only 3 out of 5 stars. I did really enjoy the parts about the filming of GWTW.

I received this book free from the Amazon Vine program in return for  a fair review.

Neither of these things influenced my review.
Posted by Laurie Brown at 12:06 PM