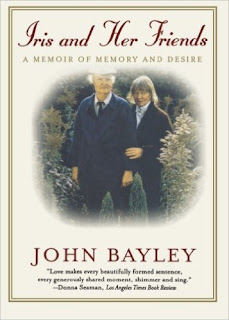 “Iris and Her Friends” is the second book John Bayley wrote about his wife, novelist and Oxford don Iris Murdoch, and her decline from Alzheimer’s disease. The term ‘her friends’ does not refer to people in her life, but to the compensations that her disease brings with it- the fact that she nearly instantly forgets bad things that happen, the warmth of simply holding someone you love, and that she no longer has to obey rules of decorum. Bayley, who had a lot of time to examine all facets of their life while caring for Iris (he took care of her at home up until a couple of weeks before her death), seems to have been determined to see all sides of the situation.

Most of the book is about Bayley’s life before meeting Iris. He reminisces about his childhood and young adulthood while lying in bed, unable to sleep because Iris is not settled into sleep herself. He was a bookish, introverted lad who stood apart from his older brothers (and his parents) in having no love for golf- they lived on a golf course. He spent most of his childhood playing by himself. While boarding school was hell for him, he took to the military quite well- he knew what was expected of him there. These memories are interspersed with the daily life of caring for Iris- walks, meals (spoon feedings), and the odd habits she developed as her disease progressed. Through it all, despite occasional episodes of rage on his part due to sheer frustration, is the love that held them together for so many decades.

While not as incredible a book as ‘Elegy for Iris’, it’s a thoughtful and moving treatise on love and loss- when the person you lose is still right in front of you.

The above is an affiliate link. If you click through and buy something- anything- Amazon will give me a few cents. This in no way influenced my review.
Posted by Laurie Brown at 5:11 PM