The Marriage of Opposites, by Alice Hoffman. Simon & Schuster, 2015 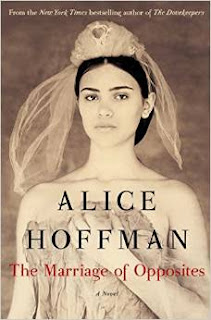 I have loved pretty much every book Alice Hoffman has written, so I was excited to receive this one for early review. For the most part, I was not disappointed.

In 1817, on the small Caribbean island of St. Thomas, teen aged Rachel Pomie, member of the small Jewish community, is told by her father that he has arranged a marriage for her. Her father and the prospective groom wish to merge their businesses, and the groom, thirty years older than Rachel, is a recent widower with three small children. Despite her dreams of going to Paris, Rachel enters the marriage with surprising dignity and maturity. Now she is trapped on St. Thomas.

Luckily Monsieur Isaac Petit is a man ahead of his time. He loved his first wife and is gentle and thoughtful with Rachel, viewing her as a partner in the job of raising a family.  Rachel makes friends with the Petit’s maid, as well as with the ghost of the first Mrs. Petit. But when Isaac suddenly dies, she finds herself alone with seven children, and no money- in their community, women cannot inherit anything. Everything she has thought she owned is now the property of Isaac’s family in France. A nephew will be sent to sort things out and run the business. Rachel finds this infuriating.

When the nephew- several years Rachel’s junior- appears, they fall in love. According to their community’s laws, they are family even though there is no blood shared between them, and thus cannot marry. Shunned when they have an affair despite lack of blessing from a rabbi, Rachel moves heaven and earth to obtain the blessing of the rabbi and be married after several years of effort. Anything can be done for love.

Which is why it is so ironic that when their youngest son, Camille Pizarro who will be acclaimed as the father of Impressionism, falls in love with the cook’s daughter, Rachel refuses to give her blessing to the match. The girls is both working class and not Jewish.

This is not just the story of Rachel and her husbands. It’s also about the love between sisters- even when the sister cannot be acknowledged; parental love; love that must be kept hidden; the horror of slavery; the lack of women’s rights in the 19th century; the persecution of Jews; and magic. There is a lot going on in this story, on several levels. It’s told so beautifully that the story leapt into my mind in glowing color. St. Thomas is a place of incredible physical beauty and the sense of place, both there and in Paris, is very important to the story. I have to admit that while Rachel is a very sympathetic character in the first portion, she is much less so later on, and we have no way of knowing why she changes so. But people do change when the shoe is on the other foot. A wonderful story that held me totally.

I received this book free from the Vine program in return for a fair review.

Neither of these things influenced my review.
Posted by Laurie Brown at 5:05 PM