The Righteous and the Wicked, by Derek Cavignano. 2014 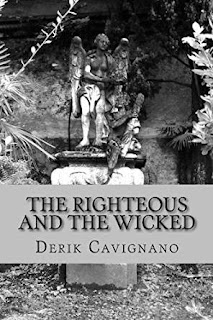 This is a work of urban fantasy/science fiction that never stops moving. Widowed accountant Jacob Hanley is about to eat lunch at a restaurant when an old man collapses in front of him, warning him about Symbios and the Great Elder, and dies. When the EMTs take the body away, Jacob discovers that the old man left a business card on the table. Then the coroner finds that the old man was only 30 years old. Jacob not only becomes curious but feels the man’s family should be notified.. and the police can’t find anyone home to tell. When Jacob makes a trip to the man’s house himself, he finds himself trapped by two thugs who are ransacking the house. Suddenly his world is upended, in an adventure that will involve his policeman brother, a dirty policeman, an accountant at Symbios, a PI with mixed allegiances, and the Great Elder, a genius who may have gone too far. The whole world is at stake by the end.

This story really held my interest. The characters are well done (especially Frank, the PI), the threat is complex and seemingly unstoppable, the action nonstop. My only beef with the story is the ending- there are a whole lot of loose ends. This is obviously the first book in a series- but you’re not told that until you get to the end and suddenly there is a big lack of explanations. I certainly want to read the sequel, but was annoyed to be left dangling abruptly.

The above is an affiliate link. If you click through and buy something, Amazon will give me a few cents. This in no way influenced my review.
Posted by Laurie Brown at 4:39 PM