Tasty: The Art and Science of What We Eat, by John McQuaid. Scribner, 2015 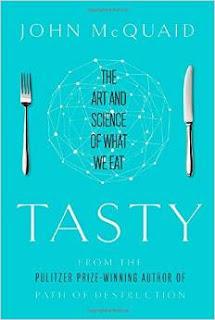 “Tasty” claims itself to be a “brief biography of flavor” and indeed it is. McQuaid shows how taste was possibly the first sense to develop in life- 500 million years ago, sea anemones, who are restricted to eating whatever the water brings them, needed a way to tell food particles from non-food particles. Whoever evolved a method of doing this first had a distinct advantage over critters that didn’t have that ability. The sense of taste is not just confined to our tongues we have taste receptors in other parts of our bodies- including in our intestines. That wasn’t an image I wanted to dwell on. Speaking of tongues, that diagram they show everyone in science class, with the tongue divided into bitter, sweet, salty, and sour? It’s bogus, and they knew it was almost as soon as it was made up, but somehow it just won’t die. Also, there is a fifth flavor- umami- which is meaty and yummy and the epitome of it is monosodium glutamate. Fat *may* be a sixth flavor.

Different people have different taste sensitivities. Some people are very sensitive to bitter-the author posits that they might have been able to detect poisonous foods back when humans were first learning what was safe to eat. Other people enjoy a touch of bitter, and revel in broccoli, coffee, and dark chocolate. Some have a much higher tolerance for capsaicin than others. Everyone is born liking sugar, but other food preferences are learned, like being able to tolerate that revolting (to most of us) rotten shark that is eaten in Iceland. Flavors can be perceived differently depending on things like the color of the plate the food is eaten off of. When a recipe is put together, different flavors build together to create a sensation of deliciousness that is greater than the sum of the parts.

This is a very good book that covers the subject well. It’s well researched and well written. It’s written in terms that the average reader can understand but isn’t dumbed down. It touches on both the science and history of food and flavors. Interesting for both the foodie and the science buff.

The above is an affiliate link. If you click through and buy something, Amazon will give me a few pennies. This does not influence my review.
Posted by Laurie Brown at 6:40 PM