The Invention of Yesterday: A 50,000 Year History of Human Culture, Conflict, and Connection, by Tamim Ansary. Hachette Book Group, 2019 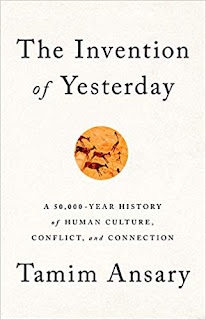 Like the butterfly effect, what happened in China affected what happened in Rome; what the Vikings did affected the world. No culture is ‘pure’; every nation has been changed by others. We are all interconnected; progress does not take place in a vacuum.

The average world history book aimed at the English speaking world tends to start with the Fertile Crescent, give a fair bit of time to the Greeks and Romans, and then go straight to Western Europe for the rest of the book, with some time spent on North and South America. Ansary looks beyond those, and focuses mainly on connections. The far flung Roman Empire put many different cultures and religions in touch with each other, as did the Vikings, and then the Crusades. When Columbus discovered the Americas, a whole new world of cultures, foods, animals, and inventions collided and merged. The advent of factory work changed how the world worked, as much or more than the transistor did. Communications and management changed the world as much as armies and navies did.

The book reminded me of “Guns, Germs, and Steel” in the way the author looked at things other than kings and armies as forces that shaped our civilization. Ansary is a bit more casually written, at times drifting into slang, but the thinking and writing is solid. I enjoyed this book a lot, and it taught me things I’d not thought of before.