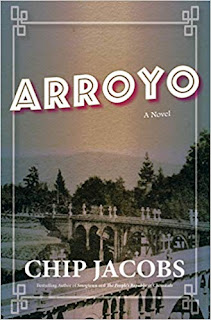 You’ve got to figure that a book that starts out with an ostrich race is going to be kind of strange. But ostrich races really *do* take place, so this in itself doesn’t knock the book into complete fantasy land. It’s the psychic, highly intelligent dog that does that, and later, the reincarnation thing. The rest is detailed history- the main characters are fictional, but there are many historical figures and the setting has been researched so well that it totally comes alive- it’s practically a character, itself.

The Arroyo in question is Arroyo Seco in Pasadena, CA, and the year is 1913. The bridge is the Colorado Street Bridge, known locally as Suicide Bridge after its completion, and 1913 is the year it is being finished and opened. You’ve all seen Colorado Street; it’s the avenue that the Rose Parade goes down on New Year’s Day. Young Nick Chance is an inventor and a bird caretaker on the local ostrich farm when the book starts, hence the race. He is developing a method of solar lighting, and gets a job working on the bridge lighting it, thus saving them from running an electrical system clear across. But there are a number of mysterious things going on, which seem to center upon the bridge. When Nick’s life is saved by a psychic stray dog, who he adopts and names Royo, he finds himself drawn into these events.

Jacobs, who is normally a journalist, has made old Pasadena come alive. The Busch Gardens, then lived in by Lilly and Adolphus Busch, sound like a fairy land-they were labeled the ‘eighth wonder of the world”. The details of the ostrich feather industry were something I’d never come across before. He describes the local businesses in detail, all of which existed- and some still exist! The characters are likable and rather whimsical, but even though I liked Nick a lot, he (and the others) had no real depth. When the story moved to 1993, I lost a lot of interest in the story. The era itself is less interesting to me, and 1993 Nick isn’t as compelling. The plot seemed to move along in the past, but sort of just… petered out in ’93. Is it worth reading? If you have any interest in Pasadena (or L.A. area) history, yes, absolutely, as long as you’re okay with it being magical realism or historical fantasy. If not, it might not be the first historical fantasy I’d reach for. Will I read another book by Jacobs? Yes, once the shut downs end I’m going to have the library get “Smogtown” for me, and possible another of his books. This one’s a four star for me.