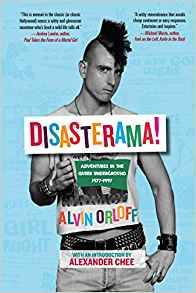 Orloff’s memoir takes us through the late 70s, 80s and 90s club scene in San Francisco. In 1977 he took a bus to Polk Street, and his adventure began. While much of the first part of the story is about relentlessly cruising for sex, whether it be in bars, parks, or bathrooms, there is more to it. There is endless dancing (it was, after all, the disco era), a lot of humor, parties, fashion (both high and vintage), a deep knowledge of old movies, Broardway, and Art Deco, and, above all, irony. While he was a very shy person, he performed with the Popstitutes and Klubstitute before becoming a deejay. He is open about his time spent as a sex worker and as a stripper. He comes across as a genuinely kind person. Then AIDS hit. No one knew where it came from, or what it would do. People were dying, right and left. Friends and lovers were lost. A way of life came to a close as the landscape became grim. This part of the story is difficult to read, but the author is so easy to read that I was engaged just as much as in the times that were more fun. The book is absorbing and humorous; I stayed up nights reading it. There are some marvelous photos and posters from the club years, too.