Elizabeth of Bohemia: The Winter Queen, by David Elias. 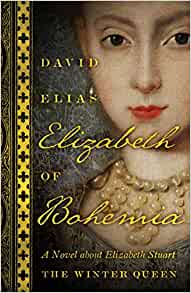 In 1596, Elizabeth Stuart was born to James IV of Scotland (soon to be James I of England when Queen Elizabeth I died) and Anne of Denmark. In 1616 she was married to Frederic V, the Elector Palatine of the Rhine (part of the Holy Roman Empire). On his part, it was a love marriage (and they married on Valentine’s Day); she was far less enthusiastic but found him tolerable. She is ambitious; he is not.

They lived happily in Heidelberg for a while; Elizabeth had 13 children. When the Bohemians overthrew their king, Ferdinand, Frederic was elected to that post. But his rule only lasted a few months before Ferdinand regained his throne and Frederic and Elizabeth had to flee. The Princes of Orange at the Hague took them in and supported hem. But they were not supported in the style to which they were accustomed, and this grated Elizabeth to no end. She conducted an incessant letter writing campaign, seeking aid from Parliament, her brother Charles (who was now King of England), and the English ambassadors.

It’s an interesting story, and we get to see it from the POV of a largely ignored character in history. But the story drags at times; there is just not enough of Elizabeth’s life that is interesting for a book of this size. I found myself really wishing at times that the author hadn’t made it so detailed, although I did enjoy the parts about Elizabeth and Walter Raleigh, and Descartes.

Elias does a good job of recreating the language of the era. Elizabeth is an important figure in that her descendants went on to become kings and queens of England. Elizabeth just does not come off as a compelling character; her scheming and complaining get very tiring after a while. The death of her beloved brother Henry left her shattered, and perhaps unable to love again. It’s the only explanation for her disregard for her children and husband.