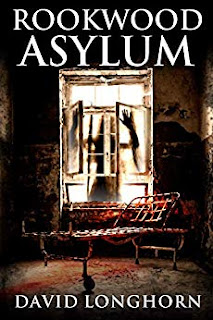 When Paul Mahan’s marriage ends, he moves into a unit in the old mental asylum that’s being developed into flats. He doesn’t pay much attention to the fact that the place is considered haunted; his career as a history professor has his attention now. But there is no peace and quiet to be found; no sooner has he moved in than supernatural events start taking place, most of which center on the one wing that hasn’t been finished yet; the wing where Dr. Palmer conducted his tortuous experiments on the asylum residents. He was trying to bring psychic talents to life in them; in one, he succeeded far better than he ever intended. That section of the asylum was destroyed, and everyone was killed.

When deaths occur and messages are scrawled on the walls, the tenants hire a TV psychic to investigate, things get dramatically worse.

I liked the main characters of Paul and his friend Mike, as well as the site supervisor Declan. There isn’t a whole lot of character development, but they are good enough. The premise was pretty good; the backstory was a little different from most haunted asylum stories. The TV psychic was amusing (I couldn’t help but picture him as William Shatner, in Denny Crane mode) in a way. The human used in the story was something I really liked and found rather unusual for a bloody horror story. The story is a page turner; four stars.