The Tincture of Time: A Memoir of (Medical) Uncertainty, by Elizabeth L. Silver. Penguin Press, 2017 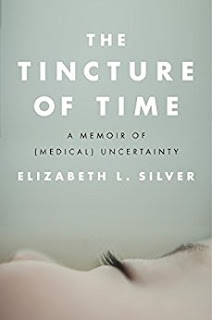 A ‘tincture of time’ is what is necessary for many, if not most, ailments to resolve one way or another. You give a patient antibiotics, and wait to for them to act. You cut a person open, and wait for them to knit back together. Or you wait, and the patient dies. Some ailments take longer to resolve than others. When Elizabeth Silver’s six week old daughter Abby starts having seizures, despite hundreds of ultrasounds, MRIs, and blood panels, in the end only time gives them an answer as to what will happen- a lot of time. Years.

While the book is based around little Abby’s medical problems, it’s about a lot more than that. It includes the history of how fever has been interpreted and treated since the ancient Greeks, Silver’s husband’s scare of an arachnoid cyst (a thing in his brain that’s harmless but looks terrible on a scan), how her sister-in-law organized 40 women to bake challah and chant prayers to have Abby cured, and much more. It’s also about how Silver is surrounded by doctors (her father, her sister, her husband) and so is right at home with medical stuff- her father, lacking a baby sitter one day when called in to do an emergency appendectomy, took 10 year old Silver to the hospital with him and then, since the nurses couldn’t provide child care, scrubbed her up and took her into the operating room with him- and how her faith in medical science is eroded by its inability to do something to help her daughter. It’s about how three different social workers came in and questioned them mercilessly as to whether one of them had abused, hit, or dropped Abby. It’s about how the fear that a medical problem- especially one that no one ever found out the reason for, and that had no ‘cure’ other than time- never really goes away. She likens, for a while, the mystery and the waiting of Abby’s disease to the disappearance of the Malaysian jet liner that had just vanished over the ocean; she feels like one of the loved ones, waiting on the ground for news, any news.

It’s an interesting story, but I felt the author wandered too much. I think perhaps the author was doing it to show how her mind wandered during the endless waiting, but it doesn’t help the narrative. The bit about fever was, perhaps, useful in the section when Abby runs a fever. The bit about the Wild Boy of Avignon less so, as is stuff about Shakespeare and quantum physics. The Malaysian jetliner is a great metaphor. I know the book originally started as an essay and an editor talked the author into expanding it into a book; I think perhaps it should have stayed a long essay. Four stars out of five.

I received this book free from the Library Thing Early Reviewers program in return for a fair review.

Neither of these things influenced my review.
Posted by Laurie Brown at 7:11 PM