Born Both: An Intersex Life, by Hida Viloria. Hachette Books, 2017 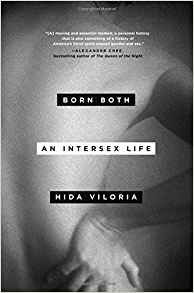 When Hida Viloria was born, the doctor took he/r father (also a doctor) aside and they had a quiet conversation. Whatever the doctor told he/r father, he rejected, and Hida was presented to he/r mother as a baby girl, and that is how s/he was raised. Hida had a rough life; he/r father was abusive, s/he was drugged and raped at a bar, s/he was a budding lesbian in a culture that doesn’t take well to that. Along with that, s/he struggled with he/r gender identity: was s/he really the girl s/he was raised to be, was s/he male instead, or was s/he somewhere in between?

The answer turned out to be ‘in between’. It took Hida years to figure that out; s/he’d didn’t hear the word ‘intersex’ until 1995. After that, things started falling into place. S/he also learned about female genital mutilation and the common practice in the US of surgically altering intersex babies so their genitals ‘look like’ girls- depriving them of a source of sexual pleasure. S/he has become a writer and an activist for the intersex community, trying to educate the world on gender fluidity and letting babies grow up as they are born.

I found the first part of the book very interesting, as Hida told about he/r journey of discovery. The latter part I found less interesting; it was all about he/r activism and it was very rushed. While I agree he/r activism is incredibly important, it’s just not as interesting to read about. Warning to the sensitive: there are graphic descriptions of sex and violence, as well as liberal use of The Big Swear Word.

Four and a half stars out of five.

I received this book free from the Amazon Vine Program in return for an unbiased review.

No link today; Amazon is screwing up.
Posted by Laurie Brown at 4:45 PM