The Girl Who Knew Too Much, by Amanda Quick. Berkley, 2017 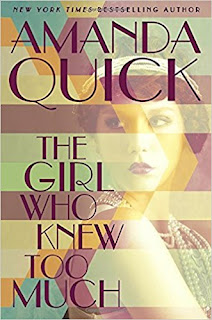 I don’t often read mysteries, so I had never encountered Amanda Quick/Jayne Castle/Jayne Anne Krentz before. But the book is set in early 1930s Hollywood and southern California, so I went for it.

The story hits the ground running; Anna Harris comes home to find her employer murdered. The dead woman has used her own blood to write a warning “Run” on the wall. Anna takes her at her word, but when she grabs her own hidden savings, she finds extra money with it, a small notebook, and a letter from her employer, advising her to run as far as she could and become someone else on the way. A trip across the country on Route 66 and Anna turns into Irene, a reporter for a Hollywood tell-all paper. Then, when called to a clandestine meeting at the Burning Cove Hotel where she will supposedly be told a good story, she finds the informant dead. Thus begins another mystery for Irene, who feels she can trust no one. A serial killer is on the loose, one who may be after Irene.

The two murder storylines run at the same time. A budding movie star who is a prime suspect, the owner/manager of the Burning Cove who was formerly a stage magician who was shot during his last act, the movie star’s gal Friday, an inventor/engineer, a sociopathic ‘fixer’ for his father’s firm; all interesting characters. As another reviewer has pointed out, Irene and the former magician make a sort of Nick and Nora couple who should be good for a series. This is not set in Hollywood but on the fringes of Hollywood life. The author is good at describing the clothing, the cars, and the settings of the early 30s.

I give this book four stars out of five; I enjoyed it a lot, but the characters could have been more fleshed out. I’m hoping that this will turn into a series and that we’ll get to know the people better. While the local murder mysteries were tied up neatly, the murder of Irene’s former employer has left an opening for further intrigue that should be interesting.

Neither of these things influenced my review.
Posted by Laurie Brown at 12:37 PM