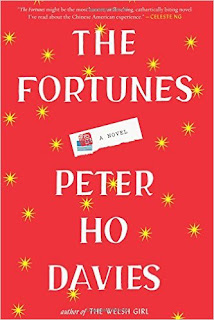 “The Fortunes” is one novella and three short stories about Chinese-Americans and the problems they have- and still do- face.

“Gold” is set in Gold Rush era California, where young Ling has been sent by Big Uncle- the owner of a floating brothel in China who raised him after his Chinese mother died and his white father paid Uncle to take care of him- to labor in a laundry. From working as an opium boy in the brothel he’s picked up some English and other languages, so he has an advantage in America. He’s hired by Charles Crocker, founder of the Central Pacific Railroad which was the western portion of the Transcontinental Railroad, as a valet. Dressed in western clothing, his que cut off, and his hat slanted over his eyes he can pass as white in dim light. He’s moving up on the socio-economic ladder, and Crocker sees his gentility and submissiveness as evidence that the Chinese will make the ideal work force for the railroad, working for less money. This causes Ling to reexamine his identity and his loyalties.

“Silver” is about Anna Mae Wong, the first Asian Hollywood star, as she makes her only trip to China. The story is told in an odd format; short, choppy episodes. This should have been my favorite story, given my interest in old Hollywood, but I found the style off-putting. The story tells how she cannot get ahead; she can only get roles as a dragon lady villain or a young butterfly-like maiden. What should have been the role of her lifetime, the lead in “The Good Earth”, was given to a non-Asian actress. Miscegenation laws prevent her from having an onscreen kiss with any white actor. Her options are limited.

“Jade” is about the brutal murder of Vincent Chin; a hate crime perpetrated by auto workers laid off by the influx of Japanese imports thinking the Chinese-American Vincent was Japanese. The narrator is Vincent’s friend, thirty years later, the friend who was present at the killing but ran to safety. There is, of course, survivor guilt for him to deal with. Somehow, despite the horror of the killing, the intensity that you’d think would be there never makes it.

“Pearl” is about a Chinese-American man and his white wife going to China to adopt a baby girl. At home, he has always felt he stood out and didn’t fit in. Now, in China, he blends away into the crowds, but doesn’t feel Chinese enough.

All these stories are anchored by the question of Chinese-American identity, of having a foot in each culture. In these stories, even those born here have that quandary: to whom do I owe allegiance? There is also the continual problem of having to face prejudice.

In the end, my favorite story was “Gold” and I rather wished it had been made into a full novel. The characters are well developed and interesting, unlike those in the shorter tales. As a whole, the book is uneven. Four stars out of five.

Neither of these things influenced my review.
Posted by Laurie Brown at 12:28 PM