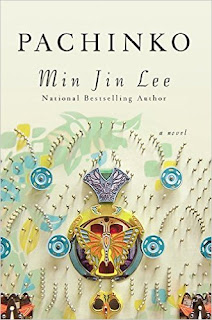 Pachinko is a great big sprawling family saga set in Korea and Japan and spanning 70 years. Sunja is a teenaged girl living with her mother, who runs a boarding house in a fishing village in Korea. All Sunja knows is work, but she does not dislike this. It’s what her mother does, too. Then she meets a fish broker, a suave older man who seduces her, impregnates her, and then informs her he’s married. He says he’ll support her, but she wants nothing more to do with him. Her face is saved when a missionary staying at the boarding house says he will marry her and raise the child as his own. They move to Japan, where Koreans are looked down on. Thence starts a new round of endless working, something all the characters will know for all their lives, whether it’s physical toil or mental.

The tale follows Sunja and her family for four generations. I found the first half, which dealt mainly with Sunja and her sister-in-law who became her best friend, more engrossing than the latter half that was about her descendants. That section was interesting, but the stark contrast between Sunja, her mother, and sister-in-law and their husbands, and the younger generations was jolting. I just found the women more interesting than the men. They are so strong, mentally and physically. But their lives are very circumscribed compared to the men. The men are city people; the women rural in outlook even when living in the city.

As Koreans in Japan, they are considered visitors even when they were born there. There were jobs they could never have; it was illegal to rent to them. When a boy turns fourteen, he has to register, be fingerprinted and interviewed, and he has to ask for permission to remain in Japan, even though he was born there and has never been to Korea. This process will be repeated every three years. And this was in the 1970s, not the 1870s. Getting Japanese citizenship was extremely difficult. But Sunja’s family does get ahead, attaining a comfortable living.

This novel is both an absorbing tale of family dynamics and a fascinating look at another culture and time. It’s a big book, but I read it quickly, unable to put it down. The characters are so well developed that I really cared about them, especially Sunja and her sister-in-law. Sometimes I wanted to strangle one or another of the characters, because they are just totally realized humans. Excellent book.