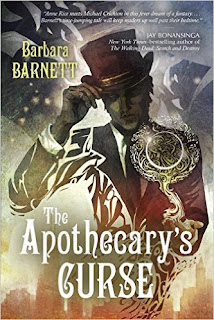 In current day Chicago, Dr. Simon Bell is an author who writes Sherlock Holmes mysteries, and Gaelan Erceldoune is a dealer in antique books. They’ve known each other a long time- a very long time. They were acquainted during Victorian days, when Bell was a physician and Erceldoune an apothecary. They owe their longevity –immortality- to potions made from an ancient book of formulas that Erceldoune got from his father. Immortality was an accident; the remedies were meant merely to cure diseases. The book has been lost for decades, with them searching for it. Bell wants it so he can die and join his long dead wife; Erceldoune because it’s family property. But Erceldoune himself is being sought by a pharmaceutical company: they are aware of a man who could survive any sort of injury and heal quickly. They want his DNA to make a fortune with. But he’s warned by Anne Shawe, who works for the company- and is connected to Erceloune in a way neither of them expects.

The story has lots of twists and turns. There is a mad scientist (or at least a psychopathic one), a book that may predate even alchemy, a ghost, a couple of love stories, modern industrial evil, and more. It’s enough to keep the reader well engaged, and yet I didn’t get hooked into the story until almost halfway through for some reason. After that point, I was eager to keep reading, but found myself unhappy with the ending. I couldn’t tell if the book was the beginning of a series, or a stand-alone with a quirky ending. Near the end I found myself having to keep going back and re-reading sections to figure out what was happening- you can’t skim through the ending of this book! It was a worthwhile read and engaging read, but slow to start.

Neither of these things influenced my review.
Posted by Laurie Brown at 1:41 PM