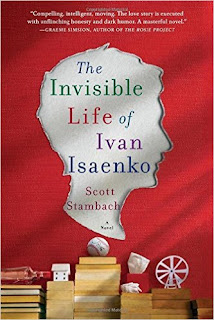 Seventeen year old Ivan is cynical, closed off, and a bit of an asshole. He has good reason to be; he’s spent his entire life in the Mazyr Hospital for Gravely Ill Children. He’s a Chernobyl baby, born with no legs and only a left arm, with a hand with two fingers and, thankfully, a thumb. He was left at the hospital as a baby, a mysterious orphan. His facial muscles don’t work right, and he finds speech difficult. His intellect is keen, though, and he reads copiously. His days are all the same; he reads, pretends to be comatose so he can eavesdrop, watches TV, and masturbates. A lot. The only ray of light in his situation is Natalya, one of the nurses, the only one who treats him like a human being. She brings him his beloved books.

Then one day a lovely teen girl, Polina, comes to the hospital for treatment for leukemia. At first they studiously ignore each other. Then they begin communicating by leaving notes around. Slowly they begin to trust each other, and a relationship blooms as her disease gets worse. She breaks through Ivan’s shell that he’s built up and makes him see that his life actually does have possibilities.

It’s a heartbreaking story laced heavily with black humor. While the reader knows part of what will happen, it does have surprises. I thought I had figured out who Ivan’s mother was, but it turned out I was very wrong. Why is he in a hospital for gravely ill children? He has birth defects, but is perfectly healthy And the final ending was unexpected. Despite the grimness, this was a book I couldn’t put down.

Neither of these things influenced my review.
Posted by Laurie Brown at 12:34 PM