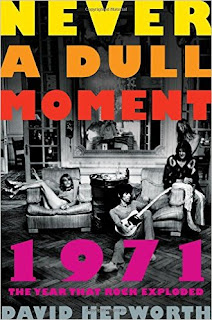 David Hepworth’s theses is that 1971 was the most important year in the history of rock/pop music. It was the year of innovations in how albums were made. It was a year of great albums made that still endure today, like ‘Tapestry’, ‘Led Zeppelin IV’, ‘Every Picture Tells a Story’, ‘Sticky Fingers’, ‘Blue’, ‘Pearl’, ‘Madman Across the Water’, ‘Harvest’, and, of course, ‘American Pie’. It was, actually, the year that albums became more important than 45 rpm singles. It was the year the Beatles were no more. The technology of making music and recording it changed. Arena rock started, as opposed to playing in clubs and halls.

Each chapter is one month in the year 1971. He doesn’t just tell us what was released by who; he goes deeper into the rock scene, covering things like Mick Jagger’s wedding, various rock stars battles with drugs and alcohol, and what producers and managers were doing. Some of the people he covers really never went anywhere. Being British, it’s seen through a British lens, but there is plenty about the American scene.

Was 1971 the most important year in rock history? I don’t know. I was surprised to find that ‘Blue’ and ‘Tapestry’ came out in ’71; they were such a seminal part of my teens (I could sing every word of both those albums) that I would have sworn they came out earlier. Likewise, I would have sworn Elton John, Rod Stewart, and Van Morrison became really big before that point. But he’s got the dates correct; that music was just so important to me that it colors my memories of the era.

It’s an interesting book- I read it in two evenings- but oddly unstirring. Hepworth is a reporter, not an ad man, and he gives us just the facts, ma’am. But the facts showed me what was below the surface of the music I came of age to.

This in no way influenced my review.
Posted by Laurie Brown at 4:27 PM