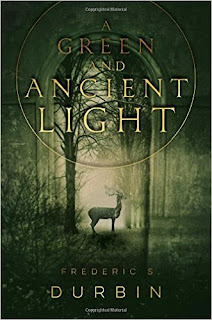 In an alternate Italy in World War 2, a nine year old boy has been sent to spend the summer with his grandmother in her rural home, safely away from the fighting and bombings. His father is in the army, and his mother is recovering from giving birth. He misses his family and friends, and is somewhat bored by country life. Then one day an enemy plane comes screaming over the village and crashes into the bay. This event turns everything upside down.

That night, a quiet knock comes on the grandmother’s back door. It’s an old friend of hers, needing help. The boy gets multiple shocks that night; the enemy pilot is alive, his grandmother is capable of sewing up people, the old friend is a faun, and there is an overgrown garden of stone monsters in the woods where the other villagers never go.

As the days go by with the pilot healing, the boy explores both the stone monsters and his grandmother’s past. It’s a magical time for him, but reality intrudes constantly; a major arrives with a unit of men, bent of locating the missing enemy pilot. They make the boy’s explorations difficult to say the least. Between keeping the pilot hidden and trying to figure out what the inscriptions of the stone monsters mean, he and his grandmother have their hands full. And it will turn out that both those endeavors have a common answer.

The prose is so stunningly beautiful that it took my breath away. I’d be willing to say that this book will be a new classic; it’s up there with Ray Bradbury, C.S. Lewis, J.M. Barrie, and Charles de Lint. The story unfolds slowly but steadily. It’s as much an adventure of the mind as of the body. Told by the narrator in adulthood but with the eyes of a nine year old, it’s an enchanted tale, suitable for kids to adults.

This in no way influenced my review.
Posted by Laurie Brown at 2:49 PM