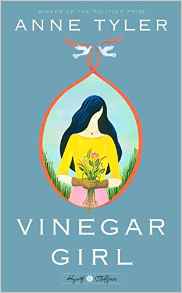 In this contemporary retelling of Shakespeare’s “The Taming of the Shrew”, Kate Battista is less shrew than just someone who doesn’t quite fit into everyday society. Twenty-nine years old, she keeps house for her father and brings up her fifteen year old airhead sister, Bunny. Thrown out of college for telling a professor his description of photosynthesis was half-assed, she works as a classroom aid at a preschool, where the kids love her but the parents and teachers not so much. She is forthright with her opinions, never mean but just sort of missing the social niceties.  Her father is a typical absent minded scientist who is near to a big breakthrough on autoimmune diseases, but he has a problem: his brilliant assistant is about at the end of his work visa and will soon have to leave the country. His idea, of course, is for Kate-who he tells bluntly isn’t going to find a husband on her own anyway- to marry the assistant, Pyotr. Needless to say, this doesn’t go over well. Pyotr does his best to ingratiate himself to Kate, but English is a second language for him and despite being here for three years, American society baffles him. Like Kate, he has no filters and tells people what he thinks. Kate, Pyotr, and Dr. Battista all seem a bit Aspergean in their lack of social skills.

Thankfully, this isn’t a rom/com but an examination of men and women, social conventions, and how people are valued by others. It is light in tone but with a hard edge running under the surface. There were a few surprises, but the best one was Bunny, who turns out to be not the airhead she acts like. This was a light, enjoyable read, and I was surprised to find that Tyler not only moved the story to modern day, but changed the tale to fit modern day women. Not Tyler’s best work by far, but nice.

The above is an affiliate link. If you click through and buy something- anything- from Amazon,  they will give me a few cents.

I received this book free from the Library Thing Early Readers program.