The Sea, The Sea; A Severed Head; by Iris Murdoch, with introduction by Sarah Churchill. Everyman’s Library, 2016 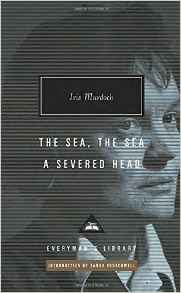 This nicely bound volume contains two of Murdoch’s works; ‘A Severed Head’ written in 1961, and ‘The Sea, The Sea’, penned in 1978. While both have male narrators and deal with love affairs, they are very different in tone.

‘A Severed Head’ is a bedroom farce, a short work (less than 200 pages) that details a short time in the life of comfortably well off wine dealer Martin. Martin has both a wife (Antonia) and a mistress (Georgie). All is well in his world. Then Antonia tells him that she wants a divorce; she is in love their friend and therapist, Palmer. She wishes to leave immediately. Palmer and Georgia wish to stay good friends with Martin, though, which Martin accedes to. It’s all very, very civilized. As the tale goes it, it turns out that nothing is as it seemed to Martin; people are coupling up all over the place and with everyone else. Despite his being cuckolded before he ever strayed, and being jerked around by everyone, I found it impossible to feel any sympathy for Martin; it’s not far into the story before he begins hitting people, something he continues to do. No one seems to have a whole lot of brains, just lust and manners. It’s funny in ways, a satire of morals and manners.

In ‘The Sea, The Sea’, the narrator is older and single, a retired actor and director who has bought a remote house on the coast that is falling into decay. He begins to write a combined memoir and diary, which is the story we read. Charles Arrowby is over sixty, and is wifeless, childless, brotherless, sisterless, and well known- although not as well-known as he likes to think. At his new home, he enjoys swimming in the sea, looking for pretty rocks, making horrible sounding meals, and fixating on women from his past. First he lights on Lizzie, who, having given up on Charles, is happily cohabiting with a gay friend. After he sends her a letter indicating he wants her back, she is ready to drop her partner. Then he accidently runs into a woman from even further back in his past: Hartley, the girl he grew up with and who was his first live, the girl who vanished and never made contact again, whose mother told Charles she was married and never wanted to see him again. One contact and he becomes obsessed with her. She admits she’s afraid of her husband Ben, and that their son ran away to escape him. This convinces him she’s trapped in an abusive marriage, and he is going to save her. He begins to stalk her, and eventually kidnaps and imprisons her in his house.

Meanwhile, he is dealing with the plague that everyone who moves to a holiday-ish locale has to live with: everyone he knows comes to visit. An old girlfriend, Lizzie and her partner, more old friends, Hartley’s estranged son, and his cousin James that he hasn’t seen for decades, all come calling without warning- of course, he doesn’t have a phone. Also, the house may be haunted. These people allow us to see things through eyes other than Charles’s; Hartley’s son fills in some of the background of Hartley’s marriage and Ben’s brutishness, while others see Ben in a very different light.

I had a hard time keeping track of the passage of time in this novel; Charles seems to exist in an alcohol fueled cloud of obsession. While the book was interesting, and I couldn’t stop reading it, I really disliked Charles. He is very much the center of the universe and no one else’s needs or wants intrude upon his thinking. His friends I have to wonder about, as they continue to party while being aware of his prisoner. I have to say the ending surprised me; it seemed tacked on in a way, but though short, it grabbed my interest in a way parts of the main story didn’t. We are left with the mystery of who and what Cousin James really was; I would have liked to know more about him than Charles!

While both stories contain people who act like fools, the writing is top notch and I enjoyed reading them- ‘The Sea, the Sea’ is some 450 pages long but I read it in a couple of days.