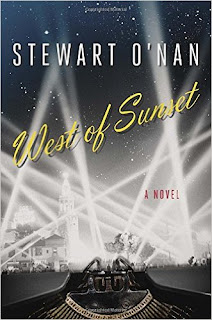 It’s 1937, and F. Scott Fitzgerald, author of ‘The Great Gatsby” and golden boy of the 1920s, is washed up. Not only is his work not in demand, he has trouble getting it bought at all- his tales of the glamorous rich don’t sell in the grim 1930s. He’s an alcoholic who has been relying on loans to support his wife Zelda in a mental institution and their daughter Scottie in private school. He’s looking for a new life in Hollywood as a screen writer. It seems like he’s got a good start; he’s been hired by a studio and given an office and a weekly paycheck whether he is writing anything or not. He reconnects with old friends: Hemingway, Bogart, Dorothy Parker. It’s a hard drinking crew and they party hard.

But the studio doesn’t seem to like anything he gives them. He wants to write quality and they want happy endings-whether the movie makes sense or not. Fitzgerald is drinking heavily. This leads to more debts, health problems, and tremendous stress on his budding relationship with gossip columnist Sheilah Graham-a relationship already stressed by the fact that Fitzgerald is still married to Zelda.

This is a sad story. Fitzgerald was a hard worker and talented writer, but he could be his own worst enemy when it came to drinking and smoking. Having to pretend to his wife and daughter that everything was okay was incredibly stressful. The ill health that had plagued him for years was getting worse. But he started working on what would become ‘The Last Tycoon’, determined to make a comeback. The author does a good job of recreating the golden age of Hollywood, while also giving the flat effect that stress and depression give to a person struggling like Fitzgerald did- the story is from Fitzgerald’s POV in the third person. While it dragged in a few places, overall it’s a good story.

The above is an affiliate link. If you click through and buy something, Amazon will give me a few cents. This in no way influenced my review.
Posted by Laurie Brown at 3:52 PM