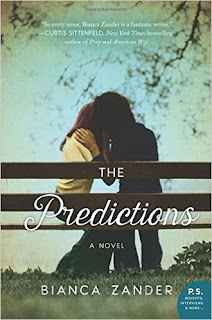 It’s 1978, and teens Poppy and Lukas have grown up at Gaialands, a commune in New Zealand. This is not a smoke-pot-and-groove commune; this vegan community grows its own food, lives without electricity, lives in leaky, mouse-ridden shelters, shares everything, and works hard all day, every day. Even the kids have been brought up communally, having their own group shelter rather than living with adults- they didn’t even know who their parents were until recently, when circumstances forced the adult’s hand.
Lukas can’t wait to come of age and escape to the larger world. He wants to form a punk rock band. Poppy just wants to be with Lukas, who she loves. But when a new person enters the commune, she begins to doubt that love.

Shakti arrives, fancy Gypsy caravan and all. She’s a New Age chick, ankle bells, Indian clothing, Tarot cards, consciousness raising, and beautiful- and too good to do any actual work on the commune. Manipulating others into doing things for her is as natural as breathing.

As a coming of age ritual for the kids, she creates predictions for them. Poppy’s states that she’ll find love in a land far away. This is almost heartbreaking, given her feelings for Lukas, but when he leaves the commune, she goes with him. It’s the only way she’ll find her true love. Things don’t go as planned, and life out in the world turns out to be harder than they thought. They eventually end up in London, where hair metal and drugs are the current hot things.

It’s a rather harsh coming of age story, but I think pretty realistic for the time and subculture. Poppy and Lukas both take their time growing up. I liked Poppy, but found her frustrating and kept finding myself wondering what the heck she was thinking when she did things. Lukas has no real depth to him, sadly. There is a side plot of a mystery that seems like it should have upset people more than it did. The story reads like the author hurried herself and she didn’t have time to develop characters and refine the plot properly. A good editor would have helped her immensely. I can only say I liked the book; I definitely can’t say I loved it.

I received this book free in return for an honest review.

Neither of these things altered my review.
Posted by Laurie Brown at 5:07 PM