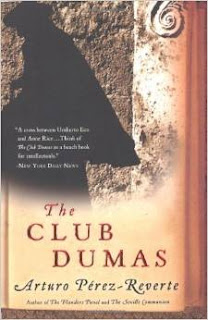 In ‘The Club Dumas’, Lucas Corso, a sort of mercenary book finder, is hired to authenticate a part of Dumas’s ‘The Three Musketeers” when the owner of it is found dead, presumably by his own hand. The search is not straight forward; it proves to have Byzantine twists and turns. Corso also finds himself in a search for a book that summons the devil; multiple versions exists and he needs to know which is the authentic one- especially since there was only one surviving copy when the author was put to death during the Inquisition. People keep dying, Corso is being followed by someone who likes to beat him up, and a young woman who calls herself Irene Adler keeps showing up.

This is a book for bibliophiles; there are numerous references to real books and many books invented just for this story. I think the story would have seemed richer to me had I a knowledge of ‘The Three Musketeers’ and other Dumas works.

The plot has so many twists and turns that I had a hard time keeping it all straight in my head. I had a big problem with the book in that I found Corso to be completely unlikable. He’s so completely self-serving that I just could not find him sympathetic. Irene Adler is a cipher; to the end we never find out who she really is. I found the endings to both plot threads rather unsatisfying. I admit that the book held my interest right up until the end; the book references, talk about how literary forgeries are done, and the history used in the story were fascinating.