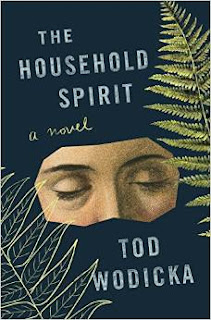 Everybody is weird to some degree, and with their own flavor of weird. Howard Jeffries and Emily Phane happen to be further-much further- along the weird continuum than most. They have lived next door to each other since Emily was new born, but have never interacted. Howard is pathologically shy and nearly incapable of showing- or perhaps of having- emotions. Emily has night terrors and is afraid of becoming close to others.

Living on an isolated stretch of highway in upstate New York, theirs are the only two houses for a distance. Howard is 50, divorced, and thinks about fishing a lot. Emily is in her twenties, and home from college to care for her grandfather after he has a brutal stroke. Peppy is the only family Emily has; her mother and grandmother were killed in an auto accident when Emily was tiny and her father was never a part of the picture. Losing her grandfather pushes Emily past the point that her fragile ego can handle; when she accidentally sets fire to her house, Howard is forced to come to her rescue, bringing her into his house to recover. They end up in an odd codependent friendship as each draws the other reluctantly out. Their odd relationship is disrupted when Howard’s daughter, Harri, who is the same age as Emily, comes crashing back into Howard’s life. She’s rarely been around since Howard’s divorce, and the reason why she’s back just about breaks Howard’s mind. Her presence forces a change that sets the odd pair back on their own separate roads to living life.

I had a hard time getting into this book; if it hadn’t been from the Vine program I probably would have given up halfway through. I’m glad I kept going, because the ending is pretty cool. I had problems with the characters – not with who they were, but how they were presented. The two main characters have pretty much zero self awareness. The secondary characters are basically props that force the protagonists to react in certain ways. Harri has no real personality (and she had a lot of potential) and we never see why she did the things she did. Likewise, we don’t get much insight into Emily’s boyfriend. He is simple a Good Guy, as Harri is a Disrupter. In the end, it’s all about how Emily and Howard watch over each other, like the household spirits of the ancients that protected families.