The Pattern in the Carpet: A Personal History with Jigsaws, by Margaret Drabble. Houghton Mifflin Harcourt 2009 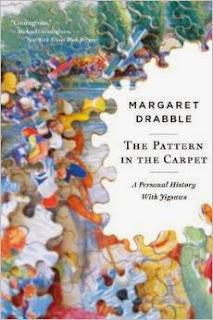 Margaret Drabble gives us the history of jigsaw puzzles in a meandering manner with lots of detours along the way. In her research (which was extensive) she found that jigsaw puzzles started out as educational toys- maps cut into countries or counties, teaching geography as they are put together. Later, picture puzzles were used as a free gift with purchase. They became immensely popular, triggering the creation of picture puzzles as things to be sold. The author relates them to the history of games in general (there have always been games), and, at the suggestion of a cab driver, to mosaics.

Drabble was introduced to jigsaw puzzles as a child by her spinster aunt Phyll, and so this memoir talks a good bit about her, and Drabble’s relationship with her- a relationship more loving –or at least friendlier-than what existed in Drabble’s own home, where the children were always being told to shut up and be quiet. It was a lifelong relationship; Drabble continued to visit her aunt until Phyll’s death in a senior home. She has also continued working jigsaw puzzles as a means of relaxation.

This is neither autobiography, family history, nor strict history of puzzles. It’s not in chronological order. It’s like sitting down with a very erudite friend and having a chat-quite possibly over one of those jigsaw puzzles- and bouncing back and forth between subjects as one does in conversation. It was a pleasant book to read, and it was very interesting to hear one of my favorite author’s personal voice as opposed to her fiction writing voice. Reading about how her research branched and led her down rabbit holes made me laugh- I know how that happens. And I found it reassuring that someone as educated and smart as herself still wastes time doing puzzles- it makes me feel less guilty about it!

The above is an affiliate link. If you click through and buy something, Amazon will give me a few cents. This in no way influenced my review.
Posted by Laurie Brown at 1:07 PM