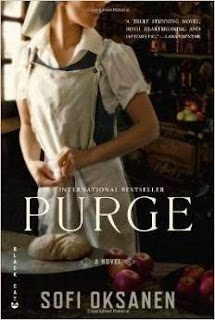 One night in 1992, Aliide Truu finds what at first glance seems to be a pile of rags in her front yard in Estonia. A closer look reveals that it’s a young woman, bruised and battered. Against all instincts, she goes out and brings the girl in. Zara tells the first of her stories to Aliide; that she’s had a fight with her rich husband. In reality, Zara is running from her pimp, who lied to her in her Vladivostok home, telling her she could go to Germany for job training. He brought her to Germany and made her into a sex slave, controlling her with emotional, physical, and sexual abuse. The shame she feels over this makes her lie to Aliide, sure that she is so disgusting no one would ever help her if they knew. And she wants- needs- Aliide to take her in. They have a connection that Aliide doesn’t know about.

Aliide has secrets of her own. Flashbacks show her living in Estonia as it’s invaded and controlled first by the Fascists and then by the Stalinists. She is ashamed that she was brutally raped as part of an interrogation. She also married a Communist, making the townspeople she grew up with call her a collaborator and shun her. Then there is the matter of what ultimately happened to her brother-in-law, a man she wanted to take from her sister- the sister she had deported via her husband’s contacts. Both women are deeply ashamed to what has been done *to* them.

The ending surprised me. I suppose it shouldn’t have, as Aliide had already shown herself to be a survivor. I thought it was be best ending possible, despite being violent.

It’s a hard book to read. Not because of the writing; the writing flows quickly and fluidly. It’s because the things that happen to the characters are so awful. Oksanen describes the rapes and abuse quite graphically, yet so matter-of-factly that it’s almost surreal; just, well, that happened; let’s keep going. And I think this is because that’s how the people in their situations- and there were and are many- have to deal with it. Just keep going. No time for a screaming fit. These are horrors unimaginable to most of us in the USA, and so many people- whole countries- have endured them. In my opinion, this is a book that should be required reading at some level. There is too much sex and violence for schools in the USA to accept, but it should at least be required in college.

The above is an affiliate link. If you click through and buy something, Amazon will give me a few cents. This in no way influenced my review.
Posted by Laurie Brown at 12:50 PM