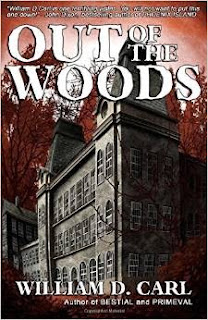 An old mental institution out in rural Pennsylvania is being shut down because it’s physically a wreck-so bad that the top floor can’t even be used anymore. The only patients left are the ones in the worst shape, in solitary lockdown; the staff is down to a skeleton crew. It’s the day before Halloween. A huge storm is brewing. When a new patient is brought in, he is hallucinating badly- they assume. Our narrator listens for a while to the nonsense being spouted by the surprisingly articulate Gary McCoy and decides that this could be his ticket to publishing and a better job, his very own Three Faces of Eve or Billy Milligan. Because McCoy has created an incredible tale that hangs together pretty well.

McCoy is from a village in the woods that is unknown to outsiders. The people there, all related, have been inbreeding for years to create McCoy, who, as ‘The Preacher’, will be the gate through which the Old Ones will come on Halloween night. The dimension of the Old Ones overlies our own, and sometimes the dwellers can be seen, horrible creatures that long to eat us all up. While the narrator tells the story from today, his tale takes place in 1983, back before cellphones and GPS.

A quick trip to the area McCoy mapped out shows the narrator and his fiancé, Dr. Deena Bierce, that McCoy is telling the truth about at least some things. The ramshackle village exists, and the majority of the dwellers show signs of inbreeding. McCoy’s father is outraged that his son has been locked up and demands his return, threatening to come get him if he’s not returned promptly. On Halloween night the half dozen staff still in the hospital find themselves under assault by nature, villagers, and supernatural forces.

The story is on one hand nearly laughable- the characters make every mistake made in horror movies. I expected them to hide behind the chainsaws. On the other hand, it’s scary as hell with a huge amount of tension. Other than the narrator we don’t know who will survive. They are fighting forces that seem insurmountable. Things keep going from bad to worse. Once I got a ways into the story I couldn’t put it down. The author has managed to make McCoy a sympathetic character. If you like B-grade horror movies, give this story a read. Note: the story is graphically bloody. It’s not for the faint of heart or weak of stomach.

The above is an affiliate link. If you click through and buy something, Amazon will pay me a few cents.

I received this book free from Library Thing in return for an honest review.

Neither of these things influenced my review.
Posted by Laurie Brown at 12:09 PM