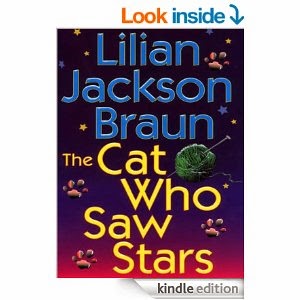 Many years ago, when I was a teen and dinosaurs roamed the earth, I read the very first “Cat Who” book: “The Cat Who Could Read Backwards” and enjoyed it. Decades later, I discovered that Braun had written a whole series of ‘Cat Who’ mysteries. So I picked this book up when I saw it.

The protagonist, a news reporter named Qwilleran, is still the same. He’s a recovered alcoholic with literate tastes and a sixth sense for news. The cat, Koko, (the one who could read backwards) is still with him (Koko also has a sixth sense for news and finds ways to communicate these things to Qwilleran), and has been joined by Yum Yum, another Siamese. Qwilleran and cats have moved from a big city to a small town. The cats are not like the ones in the Mrs. Murphey Mysteries by Rita Mae Brown- Brown’s cats talk amongst themselves like humans; Braun’s do not. The only thoughts we are privy to are Qwilleran’s.

Sadly, this book was not like the first one. It’s the 21st book in the series, and Braun seems to have lost her touch on this one. It’s disjointed and lacks any tension. A person turns up dead near the beginning, and that mystery is never solved- barely mentioned later. There are a couple of instances where a scene starts and goes a ways, then there are a few sentences that contradict what just happened. While the ending is dramatic, it has nothing to do with the murders at all. It all has an air of “And then this happened. And this. And this” and very little of it advances the story other than in time. It’s fitting that it occurs in summer, because it really reads like “How I Spent My Summer Vacation” by a 6th grader.