In the Night Room, by Peter Straub. Ballantine Books, 2004 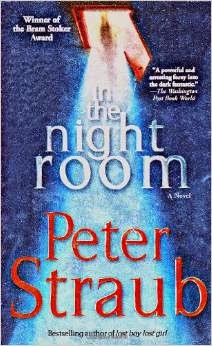 Author Tim Underhill is having a bad day. He gets weird emails that come from dead people- and also emails from an exceptionally rude angel. He sees his dead sister. A ‘fan’ approaches him as he has lunch, asking him to sign a whole bag full of books, proceeds to rant about finding the ‘real’, perfect version of books, and then stalks Underhill.

Willy Patrick, author of children’s books, is also having a bad day. She is convinced that her daughter is being held in a warehouse. But her daughter, and her late husband, were killed some time ago. She is well aware that this is a kind of madness, so she goes back home, to her incredibly wealthy fiancé’s house that she is moving into in preparation for their wedding. Her fiancé is very secretive about what he does and is a control freak. Quite by accident she finds that her fiancé may have had something to do with her husband’s and daughter’s deaths, and she finds herself on the run. She winds up meeting Underhill, and they both flee the area.

I found this book to be rather frustrating. Straub played with reality in ways that I found hard to follow for a good long time- which is okay for a while. Patrick is said to be the author of the book “lost boy lost girl”- which of course Straub wrote (and I suspect that ‘Night Room’ would be a lot easier to follow if one has read ‘lost boy lost girl’ first.) Some things are said to be from his imagination, but other things are supposed to be ‘real’. The plot takes its time to get anywhere, with many things introduced that ultimately don’t go anywhere and left me, at the end, wondering what that bit was all about and if I’d missed something. For example, the emails from Underhill’s dead acquaintances seem to merely function to let him know that something weird is happening; they have no impact on the story itself. But the thing that bothered me the worst is that the story completely failed to scare me.