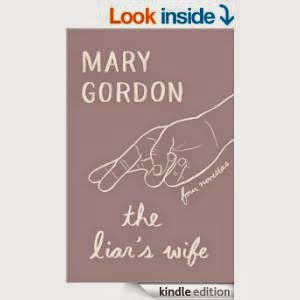 “The Liar’s Wife” is only one of the four novellas in this book. Veteran writer Gordon has produced stories where the protagonists are all knocked out of their comfort zones and find themselves contemplating life changing moral issues.

In the first, the title story, a 70-some year old woman is surprised by the appearance of her ex-husband. They were only married a short time before she fled, unable to settle into a life in Ireland with a musician husband who, of course, lies continually. Her life has been comfortable; happy children, career she liked, good husband, three houses. His has been the opposite, but he feels he’s lived life to the fullest. Whose life has been better? Has one been a waste?

In “Simone Weil in New York” the protagonist is a young woman who was one of Weil’s students in France. Now married to an American doctor who is stationed in the Pacific Theater during WW 2, with a baby and living with her brother, she encounters Weil in the street. She is not happy to see her; she represents all that has been lost because of the war. As a student she had loved and revered Weil; now she feels a tangle of feelings. Weil feels an obligation to live as the poorest live; does that help anyone? Should Genevieve feel guilty for being safe in America instead of being part of the French Resistance? Can she break free of Weil’s philosophy?

The narrator in “Thomas Mann in Gary, Indiana” is an old man, looking back on his life. The high point of his life was when, in high school, he was selected to present the visiting Thomas Mann to the school. Mann has left Germany because of the Nazi regime and is visiting the school to lecture on what is happening in Germany. Like Weil, Mann cannot enjoy his own freedom and success because of guilt over what is going on in his native country; this opens the high school boy’s eyes to the racism that is so casually accepted in America- so casually that no one ever really sees it.

My favorite story is the last one, “Fine Arts”. A college student who has been given a grant to go overseas to study the work of sculptor Citivali for her doctoral thesis. Theresa has had a hard life; her childhood was taken up with caring for a bed ridden father; her teens taken up with studying. Her one indulgence has been an affair with her married mentor, who is a self absorbed ass. Two of the sculptures that she wishes to study are in a private collection; the owner turns Theresa’s life upside down and completely reverses her situation.

All four protagonists wrestle with moral issues. Is what they are doing worthwhile? Are they wasting their lives? Is it all right to enjoy your life while others suffer? It sounds grim, but the stories are very engaging and thought provoking without being heavy. The prose is so… perfect… that it just leads you on into the stories.

This book was given to me by the Amazon Vine program in return for an honest review. This in no way affected my review.
Posted by Laurie Brown at 8:09 PM