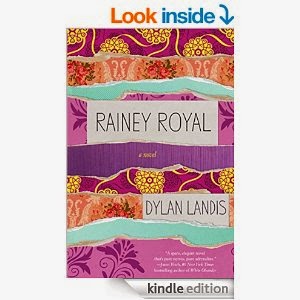 ‘Rainey Royal’ is a novel told in short stories using the same characters. In one, Rainey is 14; in another, she’s 18; the novel ends when she’s 25 and has become full owner of the building she grew up in. I cannot say that she was ‘brought up’ there, as she seems to have grown without any real adult supervision. Her mother left to live in an ashram when Rainey was young, getting in contact only twice a year. Her father, Howard, sells off everything in the house, even though it belongs to Rainey’s grandmother and will be Rainey’s when she’s 25. Her father’s best friend, Gordy, lives in the house and is a pedophile that comes into Rainey’s room every night and brushes her hair and gives her back massages that frequently include more than her back. The house is constantly filled with various musicians and groupies. It’s the 70s, so free love and drugs are rife in the house. Howard routinely seduces Rainey’s friends.

At first I didn’t care for Rainey or her best friend Tina. In their teens, these are the girls that other girls envy and fear. These are the girls who beat you up in the bathroom and are well versed in the effect their blooming sexuality has on males- especially grown men- and wield its power for their own amusement. But as Rainey grows you see how vulnerable she is despite presenting a hard personality to the world. There are reasons she acts out like she does.  Tina is even more unpleasant at the beginning than Rainey is.

Oddly, given that the book is named for Rainey, the later stories move from Rainey’s POV to Tina’s and Leah’s (another friend). They grow a lot, too, over the course of the 11 years the book covers. In the end, I actually liked Tina, which surprised me. I thought it was an excellent book. It’s about young adults, but I wouldn’t class the book itself as YA.

This book was given to me by the Amazon Vine program in return for an unbiased review.

Neither of these things affected my review.
Posted by Laurie Brown at 2:41 PM