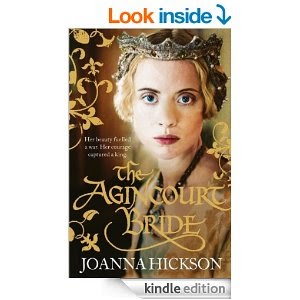 The Agincourt bride is Catherine de Valois, daughter of Charles VI, the mad king of France. Her mother, Isabeau of Baveria, doesn’t care about her children and neglects them until she needs them for her plotting. So when Catherine is born, a wet nurse is needed immediately. Teen aged Guillaumette (Mette) has just had her first child, which does not survive. She is pressed into service to nurse the newborn Catherine. A bond is formed, like that between mother and child. Mette loves Catherine as much as she would her own child- in fact, sometimes it seems like she loves Catherine more than she does her own two children who are born later. She cares for Katherine- and two of her brothers- while she is a toddler, but they are split up when Catherine is sent to a nunnery to be educated. They do not meet again until Catherine is a teenager and is brought back to court to be used as bait for the English king, Henry V. Catherine has Mette brought back to court as her lady of the robes, giving her a post which allows her to be at court. As battles between Henry’s armies and the French forces rage (including the famous Battle of Agincourt where so many French knights were killed) and diplomacy goes back and forth, Catherine is one minute to be given to Henry and the next minute to have an uncertain future. She has to deal with her monstrous mother, and, worse, the Duke of Burgundy, a nasty piece of work if there ever was one. Catherine has few friends- everyone spies on each other- and Mette is the one person who knows everything about her.

The story is written in first person by Mette, who knows how to read, write and do arithmetic because she was brought up in the family baking business. It’s written with a sense of distance from the subject, both in time and proximity. We get to watch Catherine grow and mature and develop an inner self that is like a slim blade of steel. Her family is incredibly dysfunctional; her mother declares her own son a bastard, her father is psychotic, another son has an eating disorder that kills him, and her mother allows Burgundy to do what he wishes with Catherine. Mette looks on with her middle class sensibility that allows us to see the nobility with no varnish of adoration. Interspersed are letters that Catherine wrote but never sent, showing us her heart.

I enjoyed the book, although at times it seemed slow. I suppose that is necessarily so, as much of Catherine’s life is spent waiting to see what will be arranged for her. The book is dense with details that bring the time and people to life vividly, right down to the meals they ate and the clothes they wore. While this era – the early 1400s- is not as popular as the following Tudor era, the Tudors dynasty would have never existed had it not been for Catherine.

The above is an affiliate link. If you click through and buy something, Amazon will give me a few cents.
I received this book free in return for an honest review from the Amazon Vine program.
Neither of these things affected my review.
Posted by Laurie Brown at 7:55 PM