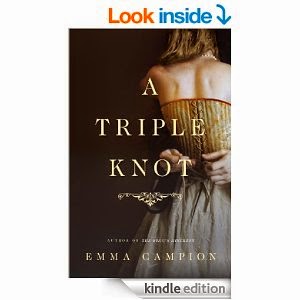 Until very recently, royal children were nothing more than political pawns, brood mares and stallions to cement relationships and ensure thrones. Joan, known later as the Fair Maid of Kent, was one such child. Her father was executed for treason when she was only two; even though she was the child of a traitor she was still a royal child and as such worth something in the marriage market. Her marriage would be arranged by the King and his people. For her to marry without royal permission was treason.

“Triple Knot” covers Joan’s life from her childhood until the beginning of her third marriage. Joan grew up with the other royal children, including Prince Edward, who would become known as the Black Prince. At twelve, she is sent across the Channel to Antwerp while her future is determined. While there, the father of a prospective husband for her becomes seriously creepy, making blatant overtures to Joan. Sir Thomas Holland, in his late 20s, steps in to protect her. Joan falls in love with Holland and she conceives a scheme to protect her from a marriage she does not want: she and Holland will wed quietly and consummate the marriage. (note: in that time period, any girl who had started menstruating was considered old enough to bed) Holland leaves for war the next morning, but Joan thinks their private marriage will protect her. Wrong; she finds her claims of marriage unheard and she is married to another man. For almost ten years she and Holland strive to get their marriage made official and her second marriage overturned by the Pope. During this time Joan finds herself hidden and imprisoned by her second ‘husband’. Not much of a life for a teenager, but Joan was a very strong woman. She eventually gets her happy ending- for a few years. A young widow, she ties the third knot- with Prince Edward, her suitor from childhood. (none of this is spoilers; it’s pretty much all on the book cover).

I could not put this book down. Even knowing what events would occur I read eagerly on to see what happened. Much of the book is from the POV of Joan, so we get to know her best, but there are some parts with other POVs that fill in a lot of events. The author expertly showed Joan maturing from child to woman. There is a lot of historical detail, both of big events (the Hundred Years War, the plague) and the minutia of daily life in the middle ages. I would love to see the author write about Joan’s later life, but I suspect the romance of Joan’s first marriage is what drew her to the story. After all, Joan, who became Princess and mother of a king, could have been buried next to the Black Prince, but chose instead to be interred next to Holland. That’s a lasting love. I only have one complaint about the book: Would it kill the cover artists on historical novels to get the clothing right for the period?!?!

The above is an affiliate link. If you click through and buy something, Amazon will give me a few cents. I was given this book free in exchange for an honest review. Neither of these things affected my review.
Posted by Laurie Brown at 5:49 PM