In the 15th century, if there was a rich woman whose wealth you craved, you accused her of witchcraft. Powerful woman in the way of your advancement? Accuse her of witchcraft. Powerful man who you want brought down? Accuse his wife of witchcraft. None of these women were witches, although one did admit to seeking out a wise woman for a charm to help her conceive. What they were, were powerful, rich women who stood in the way of powerful men. Witchcraft was an easy accusation to make, since it’s impossible to prove one didn’t do it.

Joan of Navarre, Eleanor Cobham, Jacquetta of Luxembourg, and Elizabeth Woodville are the women this book examines. The author gives the first two each a section of their own; Jacquetta and Elizabeth, being mother and daughter, share the last half of the book. I have to admit; Woodville was the only one I was familiar with. I had never even heard of Cobham. Turns out that they were fairly important to the War of the Roses and how it turned out, yet historians have ignored them.

I found parts of the book riveting, and others lost me. Part of the problem is the fact that so many people had the same names- Henry, Richard, Joan, Elizabeth- that I would have trouble keeping them all straight in my mind. The writing was uneven, too; parts seemed like they could have used a good editor to smooth them out. The strange part, however, is that the book is basically biographies of the four women, and of the men they were attached to, rather than concentrating on the witchcraft aspect. The witchcraft trials are a very small percentage of the book. I give the book four stars. 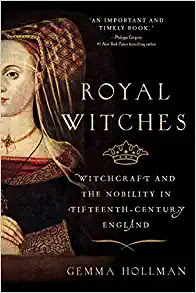