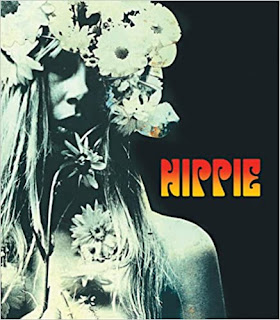 Covering seven years- 1965 through 1971- this book gives good picture of the main hippie era. Yes, hippies still exist, but these were the years when they flooded western culture with new music, new social movements, new clothing and new ways of living. Some of it wasn’t entirely new- the movement was rooted partly in the Beats of the 50s and in the intentional communities that went back some 100 years.

I really enjoyed this book; while I’ve read a good deal about the era, Miles really brought it to life. Pretty much every page has an illustration on it: photos, posters, ads. The main subjects are music and concerts, drugs, and protest movements. While “Hippie” is the title, the author also covers the Beats, the Black Power movement, Gay Pride, the Mods, and more. It’s all part of the era. I lived through the era, but I was a child and my exposure was limited to TV, radio, and magazines. This book made me wish I had been just a little older. I would have loved to have gone to a Be-In, a Dead or Joplin concert, seen the Merry Pranksters with their bus. This book isn’t just the pretty stuff, though. He exposes the meth and heroin use, the Hell’s Angels becoming an unwelcome force at concerts, the ODs and the VD, and all the ugly parts. Five stars.