Hope: A Memoir of Survival in Cleveland, by Amanda Berry and Gina DeJesus with Mary Jordan and Kevin Sullivan. Viking, 2015 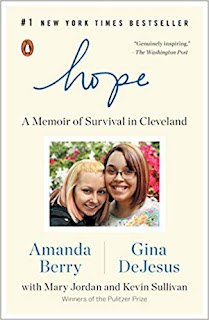 In the spring of 2003, 17 year old Amanda Berry, walking home from work, was lured into a van by the father of a schoolmate. She was then taken to his house (still believing he was taking her to see her friend), where she was grabbed, brutally raped, and then chained up in the basement. She, and later Gina DeJesus, would remain in this house until 2013. Also there was Michelle Knight, who decided to tell her story on her own, so she is largely absent from these pages.

For ten long years, they were held inside without even a window to look out of. They were chained up, repeatedly raped, not fed nearly enough, terrified the whole time. Amanda had a baby girl while captive. Her rapist, Ariel Castro, was very proud to be a father and doted on the baby- while still keeping Amanda chained up. Amanda tried to raise the little girl with some sense of normalcy, teaching her to read, write, and do arithmetic. Castro enjoyed allowing the girls to watch the TV news when their families were on, begging for the return of their loved ones- an extra little bit of sadism.

The story is nothing short of horrifying. Castro and his treatment of the young women was viscerally revolting to me. The families and the police searched for them for years without finding anything. They despaired that they would never be found, never get out. Castro lied to each of them, telling them how he liked each one better than the others and that the other girls were saying bad things about them, driving a wedge between them so they could only look to him and not have warm feelings for the others. Now, Amanda and Gina are best friends- who else could understand what they have been through?-and have the support of their families again. I’m amazed at how well they have settled back into normal lives. They are very strong people to have survived as they did- I know I could never have survived in their situation.

The book alternates points of view, not just of the two girls, but also third person sections that show what their families, the police, and Castro himself were doing at the time. Amanda kept a diary of sorts; she intended to remember every detail and wrote in notebooks Castro bought her; when she filled those, she wrote on pizza boxes, receipts, and any other piece of paper she could find. The book was riveting; like a bad auto accident, I wanted to look away but couldn’t. Five stars, but very, very hard to read.