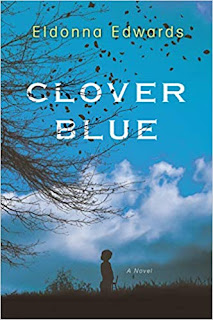 Blue is not quite 11 when one of his mothers in the communal family gives birth. Made to watch the process, it makes him ask which one of the women he came out of. The Olders get uncomfortable; the leader of the commune, Goji, tells Blue that he’ll find out when he turns 12. On Blue’s 12th birthday, the commune is disrupted by the arrival of two people. After, Goji tells Blue that he didn’t mean exactly on Blue’s birthday; he’ll tell him when it’s time. Blue finds this odd, because Goji normally treats Blue as an equal and tells the truth about things.

Set in the 1970s in northern California, Blue tells the story of his upbringing and coming into awareness of his past. Blue loves the members of the small commune. He finds out he was adopted when he was 3 but he remembers nothing of his prior life. He doesn’t even know what his birthname was. He only knows his life in the Saffron Freedom Community, which contains a guru, a surfer, a midwife and healer, a Grateful Dead groupie, a Vietnam deserter, and his best friend, a same age girl, Harmony. They live on a few leased acres, growing their food and living simply. All but Goji live in a large treehouse in an oak tree. They believe in peace, love, kindness, and reverence for all living things and the natural world. They all partake in the work needed to keep things running. There is no electricity or running water; they carry water from the springs. They stay off the radar because the State of California does not recognize the way the commune is set up; they’d have pesky questions like who one’s mother is, and why are they living under a tarp with no toilets other than an outhouse. It seems like heaven. Then things get upset when they get a new member and Goji falls for her.

The story is well paced. I loved the characters. The author really got the widening awareness that Blue has as he grows up. The setting is so well depicted I could feel and see the dry grasses and the rains. She shows that all was not sweetness and light; the commune runs into racism, violence, disdain for the hippie’s lifestyle, and the tragedies that can occur when herbal healing just isn’t enough. She also shows how well adjusted a child can be coming from a non-average up bringing; Blue and Harmony are educated well beyond their age level compared to those in regular school.

Basically the story is a coming of age and a search for identity- a search that’s a little harder for Blue than for most kids. He learns that the Olders are not as perfect as he thought, especially Goji. But they have taught him self-reliance, and that’s what he really needs, in the end.

I loved this book. I sat up until 1 a.m. for two nights reading it because I couldn’t put it down. Then, when I went to start this review, I flipped through it to refresh my memory because I read it two months ago. I ended up sitting up until 1 a.m. for two nights again, rereading, because it immediately sucked me in. And I haven’t reread anything for decades! The writing is such that I lived inside Blue, feeling his feelings. A wonderful piece of nostalgia for those of us who grew up in that era, even if not in the way Blue did. I’d give it 6 stars if I could.