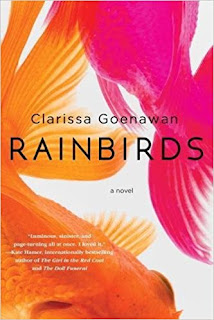 Just when Ren Ishida is finishing grad school, his older sister Keiko is murdered. They haven’t seen each other in a long time, but they talk on the phone every week. She has been living in a small town for years and he knows little of her life there. Ren goes to the town to arrange her funeral and take care of her unfinished business. Their parents do not show up; they have been absent as parents for most of Ren’s life, with Keiko pretty much raising him as she went through school.


The police have no leads; indeed, the police play little part in the story. This is Ren’s exploration of his late sister’s life- he immerses himself in her life, taking over her job as an English instructor at a cram school, and renting her old room in a politician’s house. He learns something about how her life was led by performing the same functions as she did. He also finds little clues in odd places, as well as having dreams about a small child who wants him to figure out who she is.


The story has a blue mood cast over everything, even in more upbeat moments. The writing reminds me of Haruki Murakami, with bits of magical realism thrown into Ren’s voyage of discovery about both his sister and himself. Despite the down mood, I couldn’t put the book down. There are some things that could have been better, but it’s the author’s first novel. Four and a half stars.