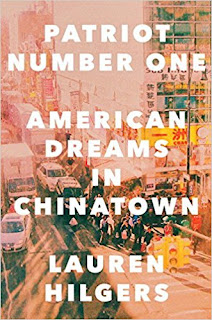 The author spent six years in China, and had been back in America two years when a contact from her expatriate time phoned her suddenly, saying he would see her soon in New York. This was totally unexpected, although she knew that Zhuang Liehong and his wife, Little Yan, were hoping to escape from China and seek political asylum in the United States. Zhuang was a political activist, seeking to reform the local system in Wukan, the village where he lived. Corruption was rife, and he wanted justice for his fellow villagers.


Escape was amazingly easy- they managed to get visas to take a tour of some US cities, under the auspices of a tour guide. The hang up was that they had to leave their infant son behind, to make it look like they were coming back. But they hoped to get asylum right away and be able to send for him. They left him with family.


New life in the US was not so easy, though. Zhuang did not speak any English, and what English Little Yan knew was rusty. Hilgers went to where she had her laundry done; the woman there gave her some contacts and hints. Soon enough, the couple found that being granted asylum was neither easy nor fast. Without asylum and green cards, they cannot get above-board jobs, so making a living is difficult. Plus, at first Zhuang insists that Little Yan must work at the same place he does, so he can keep an eye on her. And when he gets over that, he goes back to political activism, which eats up a lot of his time. This story alternates with backstory, telling us how and why Zhuang became a man the government of China wanted to keep an eye on.


There are some many people that Zhuang and Little Yan interacted with that you practically need a cast of characters. The story can be confusing at times; non-fiction is rarely as smooth and even as novels are. I found the story fascinating; those of us born in the US can barely grasp what difficulties immigrants face when they come here, particularly ones seeking political asylum. Zhuang and Little Yan were lucky because they knew someone in New York, an American who could speak their language, who was willing to devote time to helping them. I recommend this book a lot; it’s highly illuminating of problems both here and in China. Four and a half stars.