The Sorceress and the Postgraduate, by Clive Heritage-Tilley. Matador, 2018 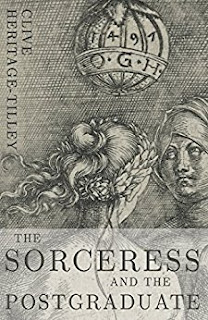 In 2017, a postgrad student at Oxford steals (“borrows”) an exhibit titled “Witch in a bottle” and opens the bottle. To his amazement, a full sized young woman appears. She speaks perfectly good modern English, and says she is a sorceress, bottled up in prison by her sister witches so that she might escape execution in 1497 Nuremberg. The mistress of Albrecht Durer, she was supposed to be released soon after the bottle was smuggled out of the prison. Things didn’t work out right, though, and she spent 600 years in suspended animation in the bottle.

As Constance- the sorceress- learns more about current times, they go in search of other magical items, which leads to another “borrowing”, that of the Alfred Jewel. From there we have Alice-in-Wonderland shrinking, magical fish, giant talking birds, and giant spiders. It’s a wild ride.

While the Witch in the bottle and the Alfred Jewel are both very real, the story is really only on the marginal edges of “historical fiction”. It’s fantasy, pure and simple. While it was a rather amusing read – and a very fast one- it’s not the best I’ve ever read. Constance adapts to the 21st century way to fast to be believable (she also gets over her 15th century lover promptly). She, and the other historical characters, all speak modern English. The story doesn’t really have a plot; it’s more of a series of adventures that aren’t really guided by anything but their curiosity – which is a splendid reason to do things in real life but it doesn’t make for a good story. And I really disliked the main male character. It reads like a first novel (and may very well be); the author has some good ideas so I hope he gets better. Three stars.