The Interior, by Lisa See. Harpertorch, 1999 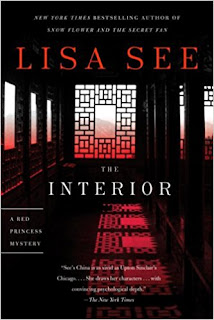 Liu Hulan is an investigator with China’s version of the FBI. Considered a “Red Princess”, she has more money and privilege beyond that of most Chinese citizens, but even so, she’s taking risks by having a white American for a lover and getting pregnant without a permit. Her lover, David Stark, is an American attorney who jumps at the chance to go into private practice when a firm offers him a posting in China and he can live with Hulan. This is following an attempt on his life and the shocking death of his friend in Los Angeles.

When an old friend contacts Hulan about the death of her adult daughter, they don’t expect it to turn into a major investigation. The death is ruled a suicide, but the mother doesn’t buy that, and clues Hulan sees tell her it was a murder. When Hulan looks into it, it leads her right to the girl’s employer- a company that is being purchased by the very firm that David is representing. More and more irregularities appear, and David feels he has to step in.

There are many, many plot strands in this story, sometimes more than I could keep track of, along with lots and lots of characters. The ‘interior’ the title refers to is the interior of China, an area almost all rural (at the time; the book is set in 1997) and extremely poor. This makes the American owned factories that have started appearing very appealing to young Chinese, especially women, who have almost no other chances for advancement. The novel exposes some of the problems that happened during that time, when there were almost no rules for foreign investors.

Legal thrillers are not normally something I read. I picked this up because I love Lisa See’s writing, both fiction and non-fiction. I enjoyed it, but didn’t feel that the characters were nearly as developed as in her historical fiction, and that she had too many different elements in the story. The detail on life in China was amazing, though, and featured an aspect of China I had read little of. Four stars.