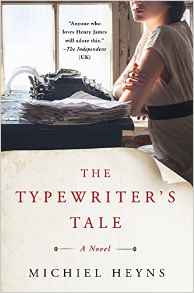 The typewriter of the title is not the machine, but rather the woman who uses it. Set in 1907, typists were referred to by that name, merged as they were in the minds of those who employed them, seen by many as mindless adjuncts to the heavy typewriters of the day. Our protagonist is one such typist, Frieda Wroth, who has had the good fortune to be selected by famed novelist Henry James to take dictation on the machine. She types out his thoughts as he wrestles with language, creating fiction out of thin air. Her days have a boring sameness, until one day a stranger (to Frieda) upends the routine. Morton Fullerton, handsome and charming, bustles in, and makes Frieda’s life much more interesting. While her day to day life appears to remain unchanged, she is now a spy receiving telepathic communication from Fullerton in France. Despite her ability to do this, she remains amazingly unaware of what is going on around her –especially in regard to Edith Wharton, who visits frequently -and how Fullerton is treating her.

The author writes in a delightfully Jamesian way, with convoluted sentences decorated with adjectives and adverbs and long words, and assumes the reader will recognize this. He also assumes that the reader is familiar with James life; Fullerton was a real person and it helps to know his previous relationship with James to understand the importance of the chore he gives to Frieda. The pace is slow-glacially so at times- and there were times when I wished *something* would happen, and I remembered why I haven’t read all that much of James. The book is pretty much the perfect length; Frieda has her awakening and the ends are tied up without the book going on so long that the style drives the modern reader, used to less florid prose, antsy with impatience. If you like Henry James’s prose, read this book. If not, don’t.

I received this book free from the Amazon Vine program in return for an unbiased review..

Neither of these things influenced my review.
Posted by Laurie Brown at 3:39 PM