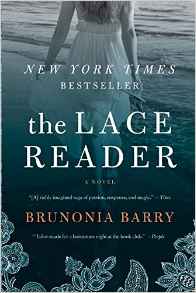 Our main narrator, Towner Whitney- real name Sophya- starts the book by telling us she’s a liar and to never trust her word. After a self-imposed exile, she has returned to Salem from the west coast because her aunt Eva is missing. She is just barely recovering from a hysterectomy, and not up to doing much. She doesn’t get much rest, though, as events go south rapidly. Eva turns up dead, the “Calvinists”- followers of Towner’s horrible father Calvin Boynton, who oppose the witches who have proliferated in Salem- are getting out of control, a teenaged girl who was involved with Boynton has been beaten by the Calvinists and vanished, and Towner is starting to get involved with Rafferty, the police man who was investigating Eva’s disappearance.

A lot of the story is told via a journal/story Towner wrote while in a psychiatric institution after her twin sister’s suicide and in other flashbacks, as well as short spans from other POVs. Witchcraft is real, and the Whitney women have the ability to scry using the Ipswich lace which is made by the abused women of a safe house on an island- a historic craft revived by Towner’s mother. Towner can also read minds- mostly unwillingly.

This is a hard book to review without giving away too much. There is a big twist at the ending. There are clues scattered throughout the story, things that at times I thought were things that were wrong but escaped the final editing. The mystery isn’t really about Eva’s death or the pregnant teenager disappearing, it’s about Towner’s past. I enjoyed the story and couldn’t put it down, but found it hard to follow with all the jumps from past to present. Having an unreliable narrator doesn’t help. I had to reread parts, especially the ending, to try and figure it all out. You really have to remember what’s been said earlier in the story to try and keep up. I thought the twist at the ending- which many reviewers have called reminiscent of ‘Sixth Sense’- was rather brilliant.