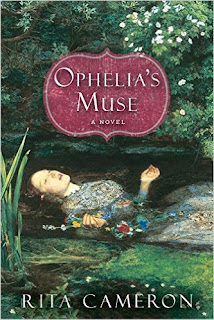 Elizabeth Siddel was born in 1829 to a family barely eking out a living in genteel poverty; a family prosperous a few generations past but no longer. She is brought up  to read and value books and art, but is forced to spend her days working at a milliner’s shop, making hats for fashionable ladies, and turning her wages over to her mother.  But one day an opportunity arises; a young artist, Walter Deverell, comes into the shop with his mother, and is taken by Lizzie’s beauty and her red hair. He wants her to pose for him. In those days, artist’s models were considered no better than prostitutes, frequently sleeping with the artist’s they sat for. But an arrangement is made; a respectable female chaperon will be provided, Lizzie will make far better wages than she does sewing hats, and her job will be held open for her. While sitting for Deverell, his friend and fellow member of the newly formed pre-Raphaelite Brotherhood, Dante Gabriel Rossetti, sees Lizzie and is smitten. Her life takes a considerably less respectable turn after this.

Theirs’s was a relationship filled with obstacles. Rossetti was from a well to do family, and Lizzie’s situation was not acceptable to them- even before she started sleeping with Rossetti. Plus, Rossetti felt that a wife would mean establishing a house and being conventional, which would distract him from the art he was devoted to. There were also issues of opiate addiction, near constant infidelity, and Lizzie’s isolation from her family once she became Rossetti’s mistress. The brilliant artist Rossetti was, in many ways, a spoiled child. These days, his art redeems him, but he could not have been an easy person to love.

This sounds like I’m giving away the whole plot, but I’m not. I knew these facts before I read the novel, and it still absorbed me. Lizzie and Dante came alive in these pages. While the members of the PRB are fairly well known today, the models still are not. Life for women in that era was very circumscribed, and anyone who stepped outside the lines of respectability had a very hard time of it.

The author describes things in detail without getting bogged down. The clothing, the art, the houses, all spring into the reader’s mind in full color. The characters are rounded and real; there are no villains here, just people trying to do the best they can. A great fictionalized biography; anyone with interest in the pre-Raphaelites should give this book a go.

I received this book free from Net Galley.

Neither of these things influenced my review.
Posted by Laurie Brown at 6:36 PM