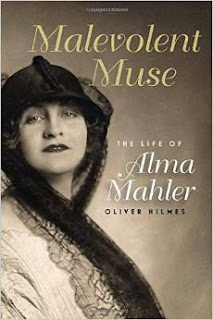 Born in 1879 and living until 1964, Alma Schindler Mahler Gropius Werfel lived a long life. She lived through two world wars, outlasted two husbands (Mahler and Werfel), divorced another one (Gropius), was constantly unfaithful, drank too much, was a virulent anti-Semite despite marrying two Jewish men and having affairs with many more, was emotionally abusive to pretty much every one around her- especially her husbands, lovers, and children-, thought Hitler had kind eyes, was self-deluded and self-aggrandizing, was a great fan of the arts, and was greedy. Yet men of genius flocked to her. Painters, writers, composers, architects, sculptors, conductors, politicians, and more all became lovers or friends. And to be either of those things, you had to be a vocal admirer. Any criticism of her and she was an enemy. So what did this woman have that other women didn’t? I confess that I am no closer to understanding that I was before reading the book.

She was physically attractive, but not exceptionally so. She knew how to decorate a house and to throw a party. She had composed a few songs described as ‘slight’ before meeting Mahler, who put an end to her composing  Apparently she must have been a good conversationalist, to have interested so many people. A number of her lovers remained attracted to her long after their affairs were over- was she that good in bed?

Was she a muse? Mahler, Gropius and Werfel were all pretty well along in their careers when she met them, so they didn’t need to her create. Werfel wrote a large number of plays and books after becoming Alma’s husband, but part of that is because she demanded that he support her in the style to which she was accustomed. To do most of his writing, he most often fled to another city until he was finished with the project- those long separations may possibly be why their marriage lasted so long.

It’s a mystery. I was rather revolted by the picture of Alma that emerged from the book. Hilmes’s research is impeccable; he waded through boxes of correspondence and diaries. Alma kept a rather thorough record of her life and relationships, although she self-censored it at some point. That she destroyed some diaries and letters is probably a good thing; as it was, her memoir, ‘En Leben’ was so full of sex that it was sold from under bookstore counters like pornography (bearing in mind that this was 1959). Her story is interesting-Alma and Werfel’s escape from Europe as Hitler’s armies took over was enough to make me hold my breath- but most of the book moves very slowly. Because of her character, I can’t say I really enjoyed the book. Just as I thought she couldn’t get any worse, she’d do or say something unforgivable. And yet, so many in her life forgave her constantly.

Neither of these things influenced my review.
Posted by Laurie Brown at 4:52 PM