The Land of Painted Caves, by Jean Auel. Crown Publishers, 2011 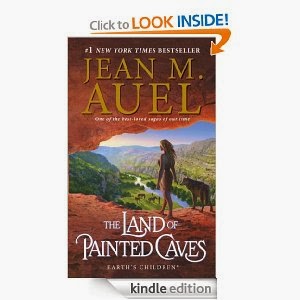 Back in 1980, ‘The Clan of the Cave Bear’ was published; it spawned a genre of prehistoric novels, none of which ever grabbed me the way that book did. Jean Auel not only put an incredible amount of research into her books, but her heroine, Alya, was one of the most engaging protagonists I’ve ever ‘met’. I followed the series as this Cro-Magnon superwoman survived being orphaned at age five and then being raised by a band of Neanderthals, learned to hunt, tamed animals, learned herbal healing, and so much more. Auel showed, in an entertaining way, how various things could have been learned and invented. I read that book at a time when I was going through a back to the land phase, and Ayla’s adventures resonated with me.

I waited eagerly for each new volume. Sadly, the quality dropped as the series went on; the books started to drag. Still, I could not give up on the series, even though I didn’t get to reading ‘Land of the Painted Caves’ until it had been out for two years. I kind of wish I hadn’t read it at all.

There is little in the way of plot; Ayla and the First (the spiritual leader of the caves and her mentor) make a journey to visit all the caves with paintings in the area. There are some personal issues for Ayla, of course, but they seem contrived. And the book is extremely repetitious; every time Ayla is introduced (which, given the travel theme, is very, very often) her entire list of names and affiliations is given as if we have never read them before; as is the fact that she has an accent. We read about every person’s reaction to the horses and to Wolf. While it’s valid that people would have never seen tame animals before, we don’t need to know about every single reaction. Nor about every time Ayla brews up tea. It’s a huge book and I feel would have benefited from some serious editing.

It is almost like Auel felt she needed to finish the series but didn’t really have it in her. It’s a sad ending for the Earth’s Children series.

The above is an affiliate link. If you click through and buy something, Amazon will give me a few cents. This in no way influences my review.
Posted by Laurie Brown at 6:26 PM