The Haunted, by Danielle Vega. Razorbill, 2019 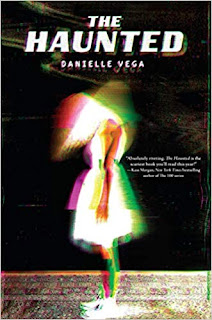 Teen-aged Hendricks Becker-O’Malley and her family move to a small town so that Hendricks can start over after a traumatic event with her ex-boyfriend. The run down house they choose to redo is the Steele House, where some horrible deaths occurred years before- deaths that were not exactly on the disclosure list at sale.

Hendricks is basically living in the house alone with her baby brother- her parents are still spending most of the time in the city, and even when they are at Steele House they barely interact. A sitter watches the baby during the day, but when Hendricks gets home, it’s her and the kid, which she barely interacts with. She also lucks out at school: she is immediately invited into the group of Cool Kids. They eat together, get together after school, and drink together. There is a lot of drinking, and it seems to be okay with all the parents.

Not only does Hendricks get immediately accepted by the Cool Kids, but the football star young man immediately likes her- maybe too much? Then there is the neighbor boy, Eddie, a dark haired Goth who the Cool Kids all ridicule and scorn because he is poor- I frankly found this to be damn near as horrifying as the supernatural parts. But he seems to know somethings about Steele House, and Hendricks finds herself strangely drawn to him. Is he part of the deaths? Can he be trusted? There is almost as much tension around the male characters as there is around the supernatural ones. And there is a lot of tension in this story.

It really is pretty scary; the supernatural sections are well done. I was less impressed with the regular teenage interactions. I could not bring myself to like the Cool Kids (although perhaps this was intentional?), having met those sorts myself back in school. Hendricks parents are remarkably detached from parenting and are virtually nonexistent. While I felt for Hendricks, with her past, the PTSD, and the supernatural frights, she’s kind of a Mary Sue. Three and a half stars, I think.