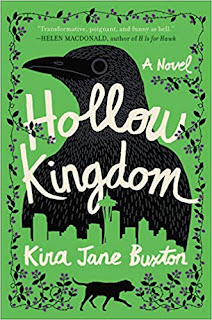 This is an end of the world as we know it, zombie apocalypse, quest novel… narrated mainly by a human-raised crow named S.T. – Shit Turd. There are occasional short passages by whales, polar bears, and others- including Genghis Cat, a true ninja. S.T.’s human has gone zombie, his eyes have fallen out of his head (and neatly saved for later by S.T., just in case Big Jim wants it back), and he’s lunging around dangerously and S.T. is afraid he’ll eat him if Big Jim catches him. So S.T. and Dennis, Big Jim’s bloodhound, take off into the great new landscape of Seattle, post zombies.

Big Jim may not have been very good with naming pets, but he taught S.T. to speak human, turn on cell phones, and a lot of other things that the average crow doesn’t know. And, when S.T. concentrates, he can also hear the Aura, Web, and Echo- the extra-sensory strands of animal communicate via.

S.T.’s quest is at first one for food, as he travels around the Seattle area standing on Dennis’s back, he starts to realize he has to do more. All around, pets – the Domestics- are trapped in houses, some with zombies inside. How can he and Dennis free them from death by starvation?

This story is several things- an epic fantasy quest tale, an ecological statement, humor, a statement on human’s over dependence on technology, a story of learning to trust, and a coming of age for S.T. as he learns who he really is. It’s sort of like if Watership Down was written by a team consisting of Tolkien, Hunter S. Thompson, an ecologist, and a zoologist. I loved it and couldn’t put it down, but it is uneven in places and is heavy handed on the ecology and technology issues. The book could have used a good edit. But S.T. is such a great narrator that (almost) all can be forgiven.